All the Right Notes: Monsters University

...or, an alternative title: Monsters University and "safe" storytelling

In the wake of Cars 2 (decidedly disappointing) and Brave (a lot of merit but also carries its own issues), I think a lot of people--animation fans and moviegoers alike--have been waiting for Pixar to "redeem" itself.  "Has Pixar lost its magic?" some ask.

So as Pixar began to pump out awesome advertising and trailers for their prequel to Monsters, Inc., there was a lot of hope that Monsters University would act as the catalyst to renew our trust in the successful animation studio.  Much like Brave, I was just as excited for Monsters U as everyone else.

And then the reviews came out.  All right, they seemed to say.  Better, but still not showing that "edge" of previous films like Up and Wall-E that puts Pixar's movies heads and shoulders above the rest.

"Too safe" seemed to be the words I saw over and over again.

And I wondered, what does that even mean?  What is "too safe" in a Pixar movie?  So, of course, I went to see it myself (with my dad, who loves animated films but can only see them with me because otherwise he feels weird at the theater--I'm certainly all too happy to oblige!).

After seeing Monsters U myself, I was--and still am--boggled by these average reviews which cite this "too safe" angle (if that is even a legitimate argument) as the movie's downfall.  Now, perhaps I'm simply too much of a sissy who enjoys her safety (that was sarcasm), but I believe that people who use this argument fail to see the timely and poignant message that MU offers not only its audiences, but the passionate and well-loved characters of its other movies.

What is that message?  Read on to find out! 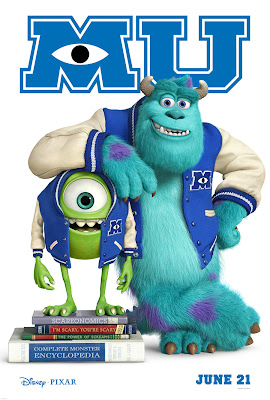 Read more »
Posted by Annamarie Mickey at 5:44 PM No comments:

So I'm taking a creative writing course this semester, and in our most recent class we did a point of view activity that I really enjoyed.  We took a section from Ernest Hemingway's short story "Hills Like White Elephants" and rewrote it from one of the character's point of views.  I haven't actually read the entire short story, but from the section we were given, we determined that Hemingway was writing from the third person objective POV.

In the section of "Hills Like White Elephants" we read, there are three characters: "The American and the girl with him" and "a woman."  They have no names, and the narration is very distant from them, really only relating their dialogue and basic actions.

After we did the exercise, we partnered up and read each other's writing.  It was very interesting to read someone else's re-interpretation, because of course everyone writes very differently.  The exercise was a lot of fun, and definitely encouraged me to try playing around with different POV's when I write!

I chose to re-tell the scene from the POV of the girl.  We were only given about five minutes to complete the exercise, so of course it's very rough, but I was actually kind of pleased with my final product, so I thought (with a few little touches here and there to fix some syntax) I'd go ahead and post it.

Just for reference, here is the original Hemingway we were given to work with, from his short story "Hills Like White Elephants":


The American and the girl with him sat at a table in the shade, outside the building. It was very hot and the express from Barcelona would come in forty minutes. It stopped at this junction for two minutes and went to Madrid.
‘What should we drink?’ the girl asked. She had taken off her hat and put it on the table.
‘It’s pretty hot,’ the man said.
‘Let’s drink beer.’
‘Dos cervezas,’ the man said into the curtain.
‘Big ones?’ a woman asked from the doorway.
‘Yes. Two big ones.’
The woman brought two glasses of beer and two felt pads. She put the felt pads and the beer
glass on the table and looked at the man and the girl. The girl was looking off at the line of hills.
They were white in the sun and the country was brown and dry.

And here is my re-interpretation from the POV of the girl:

Thankful for the shade, the girl slowly removed her hat, patting down stay wisps of hair.  She set the hat down delicately, slowly.  She wanted to sink down into one of the chairs, but the American was watching her.  Better not to show how wilted she felt in the oppressive Spanish heat.

Swallowing, the girl trilled, "What should we drink?"  Something to take her mind off the heat for a few minutes.  The train was still forty minutes out.  Her anxiety to sit was growing, but the man was still standing, so she remained stationary, drooping, hand languid on the back of the chair.

"It's pretty hot," he observed.  The girl tried not to let a flash of worry pass over her face--was her make-up running? was she sweating? or had it been simply a candid observation?

"Let's drink beer," she suggested, and was rewarded with a satisfied nod from the man as he finally pulled out a chair and sat down.  The girl sunk into her chair, suppressing a sigh of relief.

"Dos cervezas," the man said into the curtain.

"Big ones?" the woman asked.  The man's attention momentarily diverted, the girl slipped out her pocket mirror to check her face.  She quickly ran her hands over her cheeks, where the blush had smudged slightly from the wind and heat, before returning the mirror to her small handbag just as the man turned back to face her.

The drinks were brought in a moment.  The girl stared enviously at the cool sides of the glass bottles, glistening with crystal sweat in the heat.  She would have rather had water.

Posted by Annamarie Mickey at 11:07 AM No comments:

All the Right Notes: Everblue

Here on "All the Right Notes," I have mostly reviewed TV shows, with an occasional movie and book.  I have wanted, however, to review a webcomic or graphic novel for awhile now.  Webcomics and graphic novels are one of my favorite media to tell stories in because they are a perfect combination of art and writing.  So now seems as good a time as any to shift my focus onto one of my favorite webcomics, Everblue by Michael Sexton.


In any form of storytelling, atmosphere is absolutely essential.  In straight writing, atmosphere is achieved through writing style and word choice.  In movies and TV shows, however, atmosphere can be established through lighting and color palettes that create certain moods for the audience.  Though webcomics can create atmosphere through dialogue or writing, they are more similar to film in that their mood tones rely mostly on colors, lighting, and frame composition (where the camera is positioned in the scene).

Michael Sexton's webcomic Everblue is a beautiful example of the power color and lighting can have on atmosphere in graphic novels.

For a more detailed analysis of Everblue, check out the rest of the review after the break!

Although I must apologize for my absence due to school, I am far from gone!  To tide my readers over, I decided to write a short blog post about upcoming posts I hope to write in the near future.  Hopefully this list will pique your interest!  I'm really looking forward to them when I have the time.

So, without further ado, a sneak preview of future blog posts:


Posted by Annamarie Mickey at 3:05 PM No comments:

Blog Plug: Another writer on the loose!

Do you enjoy blogs dedicated to writing?  (Hopefully you do to some extent if you like mine!)

My friend and fellow English major, Rachel, is starting her own blog which is still in need of a title.  We recently attended a seminar for careers in the liberal arts.  At the writing panel, many of the panelists encouraged starting all writers to start a blog of some kind to keep us writing and critically thinking.  I got that covered already, but Rachel hadn't thought of it, so she went ahead and started her own!

Rachel is an excellent nonfiction analytical writer (as is our lot in college), but (like me) she wants to be a published fiction writer someday.  I'm not sure what her blog will focus on yet (she's probably not sure either), but I'm sure it will be something with her own journey as a writer.

Also, she needs some people to push her to coming up with a name for her blog.

So if you're interested in writing, please check out Rachel's blog and support her writing endeavors!  Whatever she posts, it should be interesting.
Posted by Annamarie Mickey at 8:37 AM No comments:

Annamarie Mickey
Pittsburgh, Pennsylvania, United States
Hi there! My name's Annamarie Mickey. I'm a recent graduate with a BA in English and a minor in theatre, working towards a career as a professional artist in the video game industry.

This blog is dedicated to my life as a growing artist and storyteller. Along with blogging about my own art endeavors, I write articles about art and storytelling in movies, shows, video games, and literature in my reviews entitled "All the Right Notes."